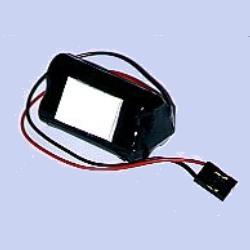 Comments:
This small battery block is commonly used in computers. Our battery is a functional replacement for the CMOS batteries mentioned above. This battery can be used in Apple Desktop machines such as the Apple Performa 6200 and AppleQuadra 600 and on many IBM motherboards. It is used in the Dell Dimension 466DM Laptop, Dell Dimension XPS466V Laptop and Dell Dimension XPS4CX Laptop as a CMOS Battery. Also found in Compaq Deskpro, Prolinea DEC 366P C386 Dell 333P Optiplex 433SL.

CMOS & Clock Backup batteries perform an important function when the power is turned off; the CMOS battery maintains the time and date, thus insuring their accuracy when the system is once again restarted. Also important, the battery saves the computers BIOS set-up configuration, so the system can be efficiently rebooted once it is switched on again. For example, the computer knows what type of hard drive it is booting from etc. These batteries are variously known as CMOS batteries, Real Time Clock (RTC) batteries, PRAM batteries or simply internal batteries.

In most cases, replacement of the CMOS battery is an easy task. It is simply a matter of locating the battery on the computer's motherboard, removing it and plugging in a new one.

Some older computers have 4 pins on the motherboard, whereas today's plug-in batteries come with a 3 pin connector (one of the pinholes is closed in order to prevent the user from inadvertently plugging the battery in with reversed polarity). If this is the case, you will need to clip the pin from the motherboard that corresponds to the sealed pinhole on the battery plug. That pin performs no function, and by removing it you ensure that future batteries will not be installed with the polarity reversed.

* Actual manufacturer may vary depending upon availability