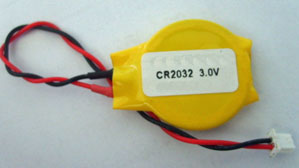 CMOS & Clock Backup batteries perform an important function when the power is turned off; the CMOS battery maintains the time and date, thus insuring their accuracy when the system is once again restarted. Also important, the battery saves the computers BIOS set-up configuration, so the system can be efficiently rebooted once it is switched on again. For example, the computer knows what type of hard drive it is booting from etc. These batteries are variously known as CMOS batteries, Real Time Clock (RTC) batteries, PRAM batteries or simply internal batteries.

In most cases, replacement of the CMOS battery is an easy task. It is simply a matter of locating the battery on the computer's motherboard, removing it and plugging in a new one.

* Actual manufacturer may vary depending upon availability