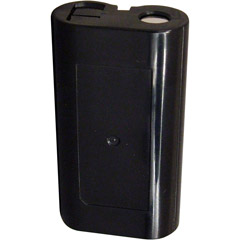 Comments:
This new improved KLIC8000 has a larger capacity of 1,520 mAh and delivers battery life that is a little less than disposable CRV3 batteries and conventional AA Lithium cells, longer than NiMH rechargeable cells and very many times longer than conventional disposable AA Alkaline batteries. Do not be confused by the comparison with 2,500 mAh AA Ni-MH batteries. This 1,520 mAh battery will comfortably out-perform them. Look at our FAQs for more information.

Li-ion chemistry performs well at low temperatures, far better that Ni-MH. If you take photographs in cold locations, this KLIC-8000 battery could solve your performance problems.

The rechargeable KLIC8000 has the great benefit of Li-ion chemistry low rate of 'self-discharge'. This means it still retains over 90% of its charge a month after charging. A NiMH battery would be getting on for 50% discharged after lying idle for a month. The Lithium-ion KLIC8000 can be recharged over 500 times and does not have a 'memory effect' - it is not necessary to drain the battery before charging.

This KLIC-8000 rechargeable battery can be fully charged in around 3 hours.