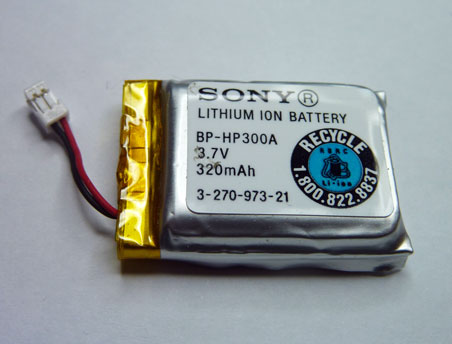 Comments:
The Sony BP-HP300A battery consists of one Li-Po cell. This Sony HP-300A replacement can also replace batteries that are made from two LiPo cells placed one on top of the other. The Sony BP-HP300A is designed to replace the battery in your Sony wireless headset:

once the performance of your battery deteriorates to unacceptable levels.

This battery will NOT fit the Sony TMR-BT10A Bluetooth Transmitter Adapter.

This Sony BP-HP300A battery has a capacity of 350mAh to give you excellent talk time and standby time. This is an increase on the 320mAh original.

This Sony BP-HP300A battery comes with a one-year warrantee.

[* please note that the image depicts the original Sony battery. Our replacement battery will differ slightly in appearance.]